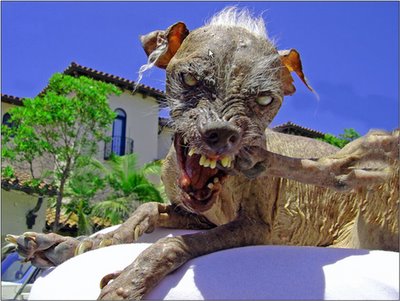 You may think this dog is some sort of muppet. I mean, he doesn't look like he could be real, right? But he is. This is Sam, the world's undisputed ugliest dog. He had a brief flash of fame, but was very old and alas, passed on. I won't speculate on how ugly an undead Sam could be.

Speaking of dogs, this could be a funny movie... 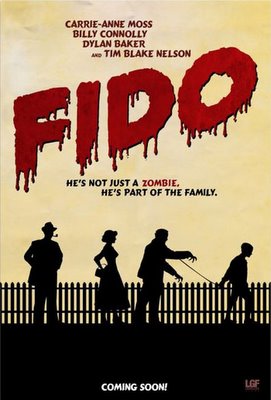 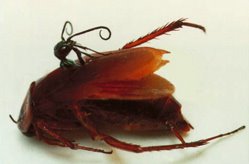 Hailing back to the brain slugs and parasites post of last month, I bring you The Wisdom of Parasites, a well researched article on yet another member of the animal kingdom capable of hijacking it's host. In this case, the wasp steers the roach by moving it's antaena. Cool stuff.
Posted by Claytonian at 2/26/2006 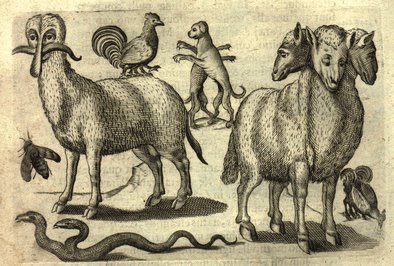 did I miss last Friday? Anways, this is from De Monstris.
Posted by Claytonian at 2/25/2006

Installing Linux on a dead badger

This is the kind of link one would expect from Benny, had he ever taken it upon himself to post. In his stead, I give you Installing Linux on a Dead Badger: User's Notes.

Speaking of Badgers, I also bring you the zombie eqivilent of the badger song. Come to think of it, that is the kind of link Nerdygirl would enjoy. Where are my blog team members?

There is nothing sweeter, and more creepy, than the gift of a beating heart!
Posted by Claytonian at 2/17/2006

The Wookie blog Brings us something truly touching today. Also, if you are wondering why this is on the zombie blog, let me point out Chewbacka has the same vocabulary of a zombie, more or less, especially in written form. Don't argue with me, or I'll rip off your arms. Also, it is animals month here.
Posted by Claytonian at 2/15/2006 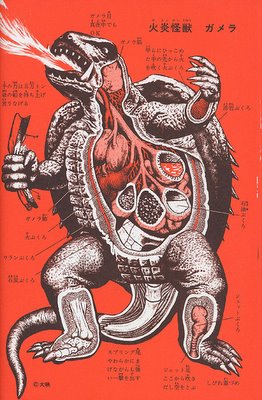 From this show. Makes me almost wonder if Japanese post-modernism doesn't have some merits.
Posted by Claytonian at 2/14/2006

It's about time I mentioned the theme 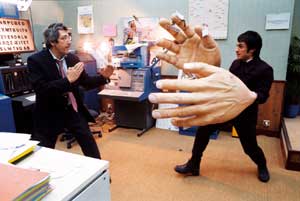 Back I say!
This month's shambling theme: zombie animals. Exploring the non-human variations of zombies. Mark's article is an excellent start on this subject.
Also, check out this trailer for a movie about a man-eating cow. The hands picture has nothing to do with anything except I liked it and, like the trailer, it came courtesy of twitchfilms (see links).
Posted by Claytonian at 2/09/2006

Zombies: Is there any geological evidence? 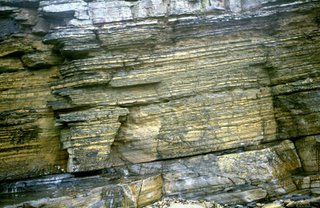 Those who know me well know that I am a geologist as well as an avid reader of weird fiction. I enjoy both with the same passion and obsession, as I'm sure most will identify with, on some level at least.

So today I will explore the possibility of geologic zombie evidence. Yes, I know... you might be wondering if such earth-shattering (pun intended) evidence really exists and if so, why haven't other well-respected geologist (like myself) not published anything on the subject; those questions are both valid and sound, but I won't be answering either. Rather, I will proceed with much arm waving and geologic jargon in the hopes that a semi-logical conclusion may spill its way out of my mind.

As can be seen by the figure below, older things are below younger things in the rock record. This is called the law of superposition. (Note: that had nothing to do with zombies.... yet!) It's a nice figure though, isn't it?

As we know already, zombies, when they strike, come in mass numbers and kill/turn many of like species with them. So at such an event, we would be able to observe both massive amount of death as well as disturbed graves, in the form of bioturbation. Biotubation is usually found in marine sediments and is caused by burrowing critters that dig into a recently deposited sand/clay layers and then dig its way out. Zombies grave sites would have a similar dig-in/dig-out pattern in the geologic record.

So, my thought is that zombies could come from different species than just humans. Maybe the dinosaurs all died because of a gang of zombie T-Rex's,... think about it... they didn't have very big brains. And we all know how much zombies like brains.

Or maybe the zombies of the past were brachiopods, or trilobites, trying to dominate the marine floor with their zombie powers of persuasion. At this rate, zombie species could have come from any corner of the Kingdom Animalia, and could explain many of the geologically puzzling mass extinctions of the past.

As far as more recent zombie events in the rock record we have a limited amount of data. But if we project the frequency of mass(zombie!!!) extinctions, we can clearly see that we are due for one.

The above evidence and arm waving, I feel, is a sufficient explanation of geo-zombies. But if any of you geologically-ignorant need some things explained to you, just leave a comment for me and I'll tell you what's up.
Posted by Unknown at 2/07/2006

Editor's note: I did not actually write this. Adam did and it seemed approprate for here. I made minor swears edits, cause I'm drunk with power. I'll get to the theme next post.

Zombie researchers, a field of professionals whose opinions often differ wildly to the point of violence, today united in expressing their outrage and horror at the return to earth of NASA’s stardust capsule.

“This return to earth of the Stardust Capsule represents the most significant threat of a space based zombie pathogen breaking out in the wider human population that we’ve seen since the discovery channel used a robot crawler to open the mysterious inner chamber of the Great Pyramid in .” 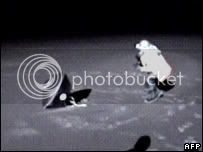 This statement by Dr. Gag Zeltwurst was part of a press release put out just hours ago by the American chapter of Zombie Watch International, the group who also recently made headlines by stating that the recent outbreaks and spread of bird flu was merely a government cover up story to mask a horrific series of local level zombie outbreaks that started after French tourists defiled the temples at Angkor Wat and in other locations in east asia. The statement read out by Dr. Zeltwurst spelled out the danger in the clearest possible terms.

“For the good of human civilization, we desperately urge the scientists of NASA not to open the Stardust Capsule at any cost and for it to be buried in a sanctified led pressure chamber at sea over the Mariana’s trench.” The group fears that exposure to the elements of deep space could have allowed the aerogel sample package to pick up the dreaded ‘great space zombie pathogen’ or GSZP, a variant of the zombie virus so horribly communicative that even “the particulate remains of the recently cremated would begin to reanimate and become mobile, moving across the land like a dust storm, infecting all who inhale even the tiniest amount of the virus laden particulate matter”. 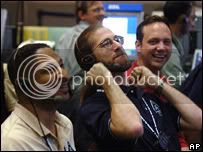 History would prove their jubilation misplaced

Further more, the group’s statement offers an even more dire prediction than a possible outbreak of GSZP. The statement reads thus, “If NASA scientists must open the sample return capsule then it is crucial to the survival of all life on earth that they are at least 47 miles away from any locations such as church buildings, synagogues, mosques, any place where significant numbers of dead are interred in any way or any other spiritual nexus point.”

Apparently according to Zombie Watch International research, an outbreak of GSZP near a so called ‘spiritual nexus point’ may concentrate so much evil in one spot that it could possibly open the long foretold of ‘gateway to hell’, a scenario whereby the unholy legions of the dammed are able to pass over into our world to inflict their deepest torments on the flesh of living man himself. 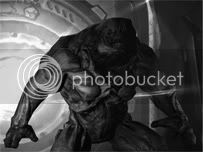 “The consequent demon invasion would threaten not just the , or the broader world economy, it would potentially be the end of human civilization.” When asked what preparations they were taking in the light of these potentially world shaking events, Dr. Zeltwurst commented that the group was “amassing arms, ammunition, body armor, heavy trucks, church equipment, priests, imams, monks, fuel, fresh water and canned food supplies. We are also beginning to train an elite, multi faith Paladin Warrior Combat Squad in the event of any demonic invasion that may occur if a GSZP outbreak occurs to close to a spiritual nexus point.” 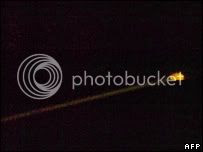 And I heard a voice in the midst of the four beasts, And I looked and behold: a pale horse. And his name, that sat on him, was Death. And Hell followed with him.

My disection weren't no thang 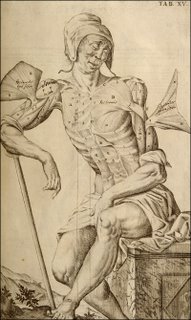 Sorry today's freaky photo is shy of an actual Friday, but Blogger went down. Today's pic comes from Dream Anatomy, which features the ridiculously glib work of a few artists that tried to take autopsy illustration to a fantastic, less clinical level.
Next post I will announce this month's shambling theme.
Posted by Claytonian at 2/05/2006