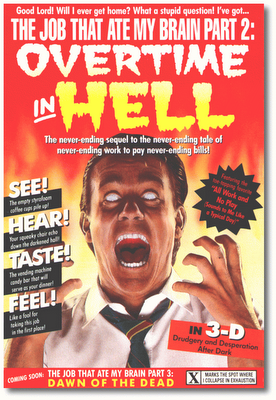 It’s now official: any film can become a musical. In this day and age, when the likes of Legally Blonde and The Lord Of The Rings are going tuneful, it should come as no surprise that The Evil Dead is the latest to make it to the stage.

Evil Dead: The Musical will arrive in New York in October, having already been work shopped in Toronto and Montreal. Created by George Reinblatt, Christopher Bond, Melissa Morris and Frank Cipolla, the show will be co-directed by Hinton Battle, best known to TV viewers as Sweet, the demon from Buffy’s musical episode.

The plot roughly follows the film’s story, but focuses on a group of friends – instead of just Ash – who unleash the evil at the secluded woods cabin. And in keeping with the movie’s popcorn status, the musical will play at 11pm on Friday and Saturday nights, with the first few rows labelled the Splatter Zone - from where there will doubtless be an opening night report from Empire's Chris Hewitt.

Hey, I made a post. Happy? I'm not; Linus found it and therefore should have wrote it. Just kidding.
Posted by Claytonian at 7/26/2006